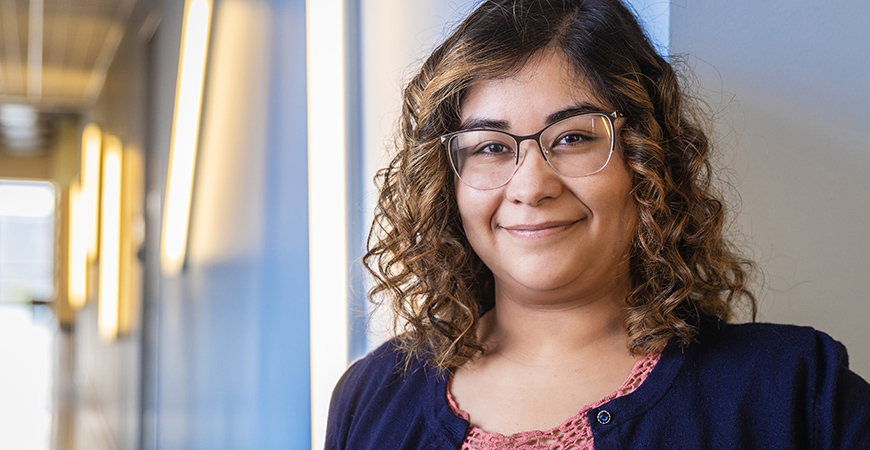 Psychological Sciences Ph.D. student Maria Ramirez Loyola is working to understand why some people are better equipped than others to handle stressful experiences.

From a young age, Maria Ramirez Loyola has been fascinated by the trait of resiliency.

Her mother escaped an abusive marriage and fled from Mexico to the U.S. with two small children in tow. Ramirez Loyola witnessed first-hand the stress and sleepless nights her mother endured to make ends meet and support her and her younger brother.

“She was poor, uneducated and spoke almost no English, so she didn't know how to take refuge legally,” Ramirez Loyola said. “Unfortunately, this resulted in a stigmatized, unlawful immigration status which made it extremely difficult for her to find a job so she could take care of us.”

Her mother’s ability to successfully adapt and recover from adverse situations served as the catalyst for Ramirez Loyola’s research interests.

“Despite all of the challenges that the universe threw at my mom, she always seemed to bounce back no matter how hard things got,” said the Psychological Sciences Ph.D. student who grew up in Perris. “This is one of the main reasons I'm interested in understanding resiliency processes in the associations between chronic stress and health.”

Her doctoral research broadly focuses on understanding resilience processes in the daily lives of young adults.

Her advisor, Professor Deborah Wiebe, said one area of Ramirez Loyola’s research has focused on the role of positive and negative emotions in how young adults manage the chronic stress of living with type 1 diabetes.

“Her master’s thesis demonstrated that being able to regulate positive emotions in daily life is an important part of withstanding the ongoing stress and hassle of managing this serious disease,” Wiebe said. “Maria’s work is making an important contribution to the field. For example, she was invited to give an oral presentation of her thesis research at the national meetings of the Society of Behavioral Medicine, and she received meritorious abstract awards from the society at large and from the Diabetes Special Interest Group.”

Another branch of Ramirez Loyola’s research focuses on understanding how ethnic/racial identity may function as a source of resilience in the associations between perceived ethnic/racial discrimination — a chronic psychosocial stressor — and the health of Latino young adults.

“I think of resilience as our ability to bend but not break in the face of stress. It’s something that can help us survive and even thrive when we face adverse or stressful situations in our everyday lives,” she said. “I’m trying to understand why some people are better equipped than others to handle stressful experiences that may undermine their health and well-being during this critical developmental period.”

After the 2016 presidential election, Ramirez Loyola read reports and heard anecdotes that suggested there was an increase in ethnic/racial discrimination experiences among Latinos in particular.

“Experiencing discrimination can potentially be really stressful and bad for one’s health. So, I became interested in identifying and understanding potential resiliency processes among Latino youth that can help them cope effectively,” she said. “It is a timely issue and something I’m personally concerned about. It is great way to bridge what I was already doing with what is happening right now in the world.”

I’m trying to understand why some people are better equipped than others to handle stressful experiences that may undermine their health and well-being during this critical developmental period.