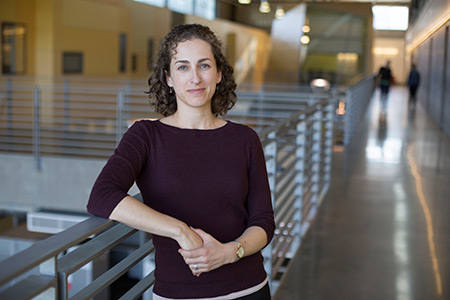 More than 120,000 young people ages 10 to 18 attempt suicide each year, and about 4,500 of those attempts are fatal. Suicide is the third leading cause of death among children ages 10-14 and the second among people 15 to 34 years old. More people die from suicide each year than from breast cancer or homicide.

But what happens to teens who make non-fatal attempts?

A new grant from the National Institutes of Mental Health (NIMH) is going to help UC Merced Professor Sidra Goldman-Mellor try to answer that question by looking at the long-term health of adolescent suicide attempters.

“It’s true that adolescents who attempt suicide once are more likely to die by suicide later. But the vast majority — 90 to 95 percent of them — will not,” Goldman-Mellor said. “That’s not to say that they go on to have good outcomes, though. They tend to be high-risk kids — but we need to look at more than just their mental health. My previous research suggests these suicidal adolescents have lots of physical health problems in their futures, as well, but we know much less about this aspect of their prognosis.”

Teens who engage in risky behaviors such as drug and alcohol use, smoking or unprotected sex; who are involved in abusive relationships; and who struggle with gender issues, homelessness or depression are more likely to try to commit suicide.

Those issues don’t disappear after a suicide attempt.

“We will be studying teenagers who showed up to any emergency room in California after attempting suicide,” Goldman-Mellor said. “We will be able to see if and when these teens returned to emergency rooms or were admitted to hospitals several years into the future. We’ll know if they were treated for additional suicide attempts, assault injuries, asthma attacks or anything else. This is really useful information because emergency rooms can be good points of intervention.”

Goldman-Mellor, with the School of Social Sciences, Humanities and Arts, is also part of the campus’s increased focus on public heath, and is an affiliate of the Health Sciences Research Institute (HSRI). She is a psychiatric epidemiologist, and most of her work involves suicidal behavior.

Her three-year study is funded by the NIMH under the National Institutes of Health’s Academic Research Enhancement Award (AREA) Program, often referred to by the funding code “R15.” The R15 program was established to stimulate research at educational institutions that have not historically been major recipients of NIH support.

The $300,000 grant will allow Goldman-Mellor and her colleagues to take a big-data approach by using California’s comprehensive hospital patient data to track what happens to adolescents who received hospital-based care in 2010.

She will not know names, but will have basic demographic information about them as well as their medical diagnoses and other information. She will follow the teenagers by using unique identification numbers to see whether, and why, they returned to California hospitals between 2010-2015. She will also be able to track the costs associated with their re-admissions.

“California is a big, diverse state, which is something epidemiologists always get excited about because it gives us real insight into population health,” she said. “This project should also tell us a lot about resilience and risk factors. We’ll be able to see whether there are certain things that put young suicide attempters at extra high risk — even the kinds of neighborhoods they live in.”

HSRI researchers have been successful in securing funding under the R15 program, with six UC Merced professors previously winning such a grant: Wei-Chun Chin and Matthew Meyer in 2009; Miriam Barlow in 2010; Nestor Oviedo in 2014; and Jennifer Manilay and Jing Xu in 2016.

The R15 money also supports training for graduate and undergraduate students, which should help with the goal of attracting more students from underrepresented populations to the health sciences.

“I hope this will help introduce them to exciting health research and possible career paths,” Goldman-Mellor said. She plans to offer a special upper-division seminar on working with big data from hospitals and focusing on the determinants and consequences of suicidal behavior. Students will be encouraged to develop research posters and attend conferences, as well.

There is a national effort to reduce suicide rates by 20 percent by 2025, and Goldman-Mellor said she’s glad to be part of that.

“Suicidal behavior is a devastating problem among young people,” she said. “It’s going to take efforts on a variety of fronts to make progress.”