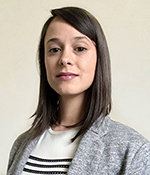 Bio:
Thaís Benoit received her bachelor’s degree in Physical Education from the Universidade Federal de Viçosa-Brazil, in 2016. After participating in different internships and extracurricular activities, Thaís became interested in learning more about sport and exercise psychology. As an undergraduate, Thaís had the opportunity to study in the United States for one and a half years. While in the United States, she worked with people from different cultures, learned a new language, and developed new research interests such as motivation and health behaviors. Thaís started her master’s degree in Kinesiology at Texas Tech University in 2018. This program allowed her to learn more about the field of sport and exercise psychology, write and publish scientific articles, and participate in conferences, such as the North American Society for the Psychology of Sport and Physical Activity (NASPSPA). As a new Ph.D. student at UC Merced, Thaís looks forward to learning more about health-related and preventive behaviors and hope to contribute to the field of health psychology by developing innovative and original research.